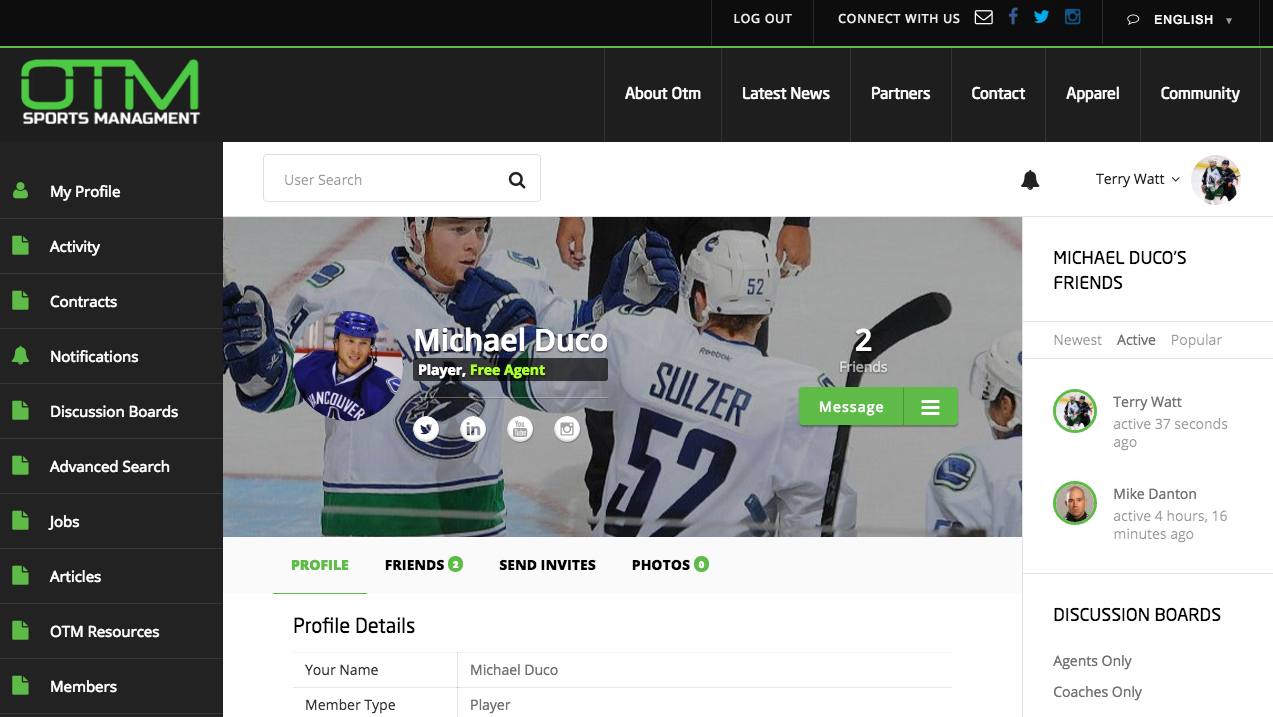 Life in the hockey industry is about to get a lot easier.

“This High Tech OTM concept will be a Game Changer.  Coaches and scouts will utilize OTM to network and recruit around the World in Real Time. OTM has finally leveled the Global Playing Field.” – Iron Mike Keenan, (KHL/NHL) Coach- OTM Promo Video.

The OTM (On The Market) Sports Network is a revolutionary new tool that is going to change the way that the hockey industry connects and competes for jobs. Combining the collaborative power of a social media-networking platform with the world of elite hockey, the folks behind OTM Sports are going to change the way day-to-day business for a hockey organization is done. OTM connects the global hockey industry with each other in real time and facilitates communications and interactions between all members from anywhere in the world. All you need is an Internet connection. Both males and females will have access to OTM profiles to be able to advance their careers. All members within the elite hockey industry Players, Head Coaches, Owners, GM’s, Agents, Scouts, Coaching Staff, Athletic Trainers, Equipment Managers, Skills Coaches and Goalie Coaches will be granted FREE profiles to eliminate any barriers of them not using this valuable resource to build championship teams in a more efficient and economic way. OTM provides all our members the power to advance their own careers, share and stay connected.

While technology may be there in terms of helping you achieve your goals on ice, the ways of achieving a job with a team or within the hockey industry are still set in the stone age. Word of mouth and phone/email tag are still the main ways of communication in finding a slot for yourself in any organization. OTM is here to change that.“Regrettably, I don’t believe that technology is currently playing enough of a role in the life of today’s athletes or in the sporting industry.” says OTM founder and CEO, Terry Watt. “Although athletes and hockey employees use social networking technology in their everyday lives, up until now there hasn’t been a platform for them to advance careers, share and stay connected. The OTM website is a game changer. I’ve been involved in the hockey industry for 28 years now and our site is so advanced and modern that there is literally nothing out there like what we have created”.

And what might that creation be, you ask? Picture the social networking platforms you use in your everyday lives, and convert it to the hockey world. Your bio includes what team you play for, what city you’re currently living in, your height and weight, if you shoot left or right, what position you play, what passports you hold, upload game highlights and photos, the ability to friend request members and use your network as references and much more. “Athletes will have an open platform to  build their own profile pages, similar to other major social networking platforms, with features that include automation of their career statistics, highlights, etc. through a partnership developed with Elite Prospects – the largest hockey database in the world.” Linking their personal social media pages (i.e. Instagram, Twitter, etc.) is another feature that can be included in the player’s profiles to leverage additional exposure.

Watt, a professional hockey player and coach, came up with the idea for OTM as his career took him all over the world in the last eight years. “You learn a lot about the game when you get a chance to play and meet people from all over the world, I wanted to build something that would help improve the game for everyone.” Watt has played in over seven different countries on a total of fourteen different teams. “When I sit back and think over my hockey career it became apparent that every opportunity I have, country I visited or team I was a part of, it was because I knew the right person to get me there,” reminisces Watt. “I can’t help but to consider that a problem.”

“Why is it fair that I got these opportunities over other qualified athletes? Just because I knew the right person, that doesn’t mean I was necessary the best person for the job. Though I am very grateful for the opportunities that I experienced, this is something that needs to change. A coach is only as good as his resources. Knowledge is power and with an OTM profile we are now giving the decision makers the power to know and find all the available players they need to build championship teams”.

He found there was a need for players to keep in the know with what was going on in the hockey world in real time. “There is nothing out there that comes close to what we have to offer athletes and the hockey industry. We are the first and only social networking site that has everything they need to be able to network and advance their careers.”

Watt turns his attention to another feature of OTM that players will find the most convenient to their careers. The discussion board. “This is a feature that I am most proud of because for the first time athletes, coaching staff , management, agents, scouts and owners will have the ability to educate each other on virtually everything in their sport,” With a moment’s notice, OTM members can share information about anything and everything. Whether its good or bad everyone in the industry will now be able to share their experiences holding everyone accountable.

“Our Discussion Boards create a way for players to share information. Topics such as their opinion of teams they played for, their experiences with coaches, countries they’ve lived in, agents & scouts they have worked with, did they get paid on time, Did  the team take care of them? Our members get real time information to allow them to make informed decision about their career. The best part is this is all private, players will have their own discussion boards where only members who hold OTM player profiles will be able to post and read these comments keeping their thoughts and experience between just the players.”

The thing that will set OTM apart is they are more then just a hockey social networking site. They go beyond and provide the resources every player should have for themselves. “Our members will be given the resources needed for personal financial advisors, assistants in perusing or continuing online degrees with accredited colleges and universities, professional on and off ice trainers, as well as providing resources for mental health & substance abuse programs.” Watt says, ensuring every athlete is taken care of.  “To help OTM members find work in their offseason and or in between contracts, we have even opened our database to employers whom specifically seek athletes for work.”

OTM doesn’t end at the player though. The next rung on the OTM ladder is coaches and management. “We are a coach’s dream!” says Watt.  “A free site for them to find every available free agent worldwide. Search our player database to keep track of players and also be able to view our live transaction page so they can hear it right from the source when the player becomes available. When players have been waived or unsigned coaches/GM’s will be able to pounce right away on their next big signing before it’s even posted anywhere online. If thats not enough to get a coach hooked how about the fact they will also be able to apply for coaching jobs all over the world posted by GM’s & Management, insuring them more job security and options than ever before.”  Coaches, management and owners will also be able to post contract offers where players from all over the world can view in detail and apply to the offers presented. “We give the people in power the option to search for their desired players or post contract offers and let the players come to them”. Concerned about you privacy? We have created a way for you to have full control of what other members can see on your profile page. You will be able to choose what information is visible and to whom, insuring your personal information is safe.

So how does one become a member of the OTM Sports Network? It sounds to good to be true, right? All you have to do is create your FREE OTM profile (otmsportsnet.com) “For those of you new in the elite hockey industry, networking for opportunities can be hard, OTM will connect you with the same opportunities that seasoned veterans have.”

There is much more that the OTM Sports Network can offer and can only be described in detail by visiting the OTM Sports Network website or with your own FREE OTM membership. There is nowhere but up from here for the hockey industry and the company itself. Watt expects high expectations and will do everything he can to deliver. “In five years from now we will be known as the #1 resource in social media networking for the sporting industries.  By then we will have expanded the OTM platform into other major sports around the world.”

What are you waiting for? Join the #OTMovement.